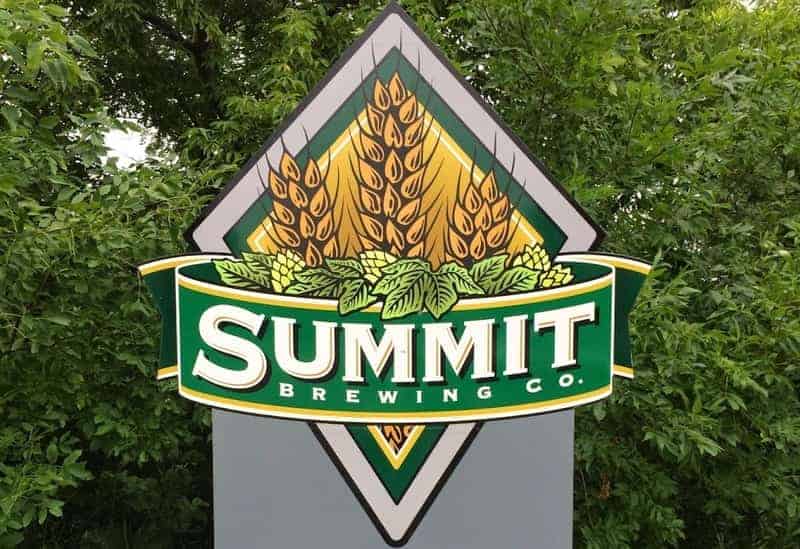 Summit Brewing Company was founded in 1986 by Mark Stutrud.  The mission was to make craft beers with old-world traditions and bring them to the citizens of St. Paul, beginning with the initial offering of Summit Extra Pale Ale.  At Summit Brewing Company they never settle for “good enough” and they go by the saying “warm storage turns good beer to shit”, never forgetting where they started from.

At Summit they pride themselves in bringing you beer by mastering the art of the complex dance between hops, malts, water, and yeast.  They only use the highest quality ingredients and top of the line process of milling, mashing, lautering, boiling, spinning, fermenting, filtering, and packaging to assure you the best-tasting beer you’ll find around St. Paul, MN.

Since St. Paul is one of the greenest cities in Minnesota, Summit Brewing Company utilizes their resources to produce eco-friendly “green” beers.  They employ a water reduction process that saves 2.7 million gallons of water per year. The brewers at Summit also use ambient air during the winter to cool their product which can then be re-used in the summer instead of wasting electricity.  They have also implemented a program to reduce 200,000 pounds of waste from being funneled into landfills annually. Another caveat is this St. Paul brewery utilizes compostable material for all of their disposable cups being used at outdoor events.

Summit Brewing Company is located at the bluffs of the Mississippi River in St. Paul, Minnesota.  There you will find a brew hall and patio to enjoy tasting new and old beers through the year. You can bring your dog while tasting the suds on the patio too while enjoying the newest recipes and always fresh pours.  Don’t forget to stop by the gift shop for a nice t-shirt or a cool Summit Brewing Company hat.

Summit Brewing Company hosts several special events throughout the year.  Such as “Loud at the Library”, where you can enjoy a free Summit beer while listening to some great local music in St. Paul at the George Latimer Central Library on April 6th at 7 p.m.  Learn to play Kubb at the Summit Brewing Beer Hall on April 7 from 5:30 p.m. to 7:30 p.m. Kubb is “Described as a cross between bowling and horseshoes, the object is to knock over wooden blocks by throwing wooden batons at them.”  On April 12th you can check out the Summit release party for Summit Lazy Sipper from 2-9 p.m. also at the Summit Beer Hall. The Lazy Sipper is a blonde ale using all local hops, which you’ll be able to enjoy paired with Rollin’ Nolen’s BBQ.

So make a trip to the Summit Brewing Company and see what all the fuss is about.

***BONUS*** If you love history as much as we do, and you’re looking for something fun and educational to do in St. Paul Minnesota, you should think about taking a tour of the Minnesota History Center.