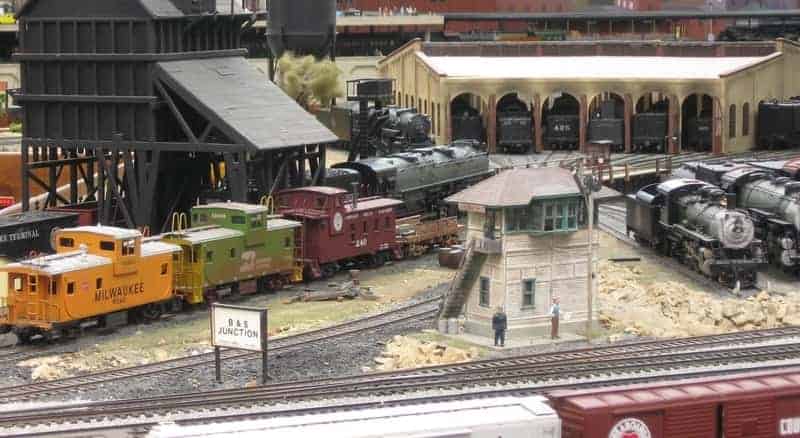 The St. Paul Model railroad Museum or otherwise referred to as the Twin City Model Railroad Museum is a capsule of sorts from yesteryear and America’s glory days of the locomotive and railway shipping industry.

The museum located in the heart of St. Paul, MN boasts a number of model trains that you can enjoy looking at.  You can also find a great deal of historical information when you make a visit to the St. Paul Railroad Museum such as the North Coast Limited and Northern Pacific Railway which ran along the Mississippi.  The museum also displays a replica of the old “Circus Trains” which carried the traveling circus and were used as promotional tools for the event as in “The Circus is coming to town.”

The model you see on the main layout at the museum was precisely built to represent the 1948 North Coast Limited.  In 1949, diesels were taking over the passenger train industry and that year saw the launch of the “streamlined” service which meant modern, lighter cars flushing out the older “heavy” cars of the 1920’s.  The new lighter trains were extremely popular and even brought on the Vista-Dome passenger cars in 1954.

The O-Scale Exhibit features the St. Anthony Falls Milling District.  Here you can see the Washburn A. Mill from 1874, James J. Hill “Stone Arch Bridge” from 1883 and the Milwaukee “Short Line Bridge” from 1880.  The model brings you all the way across the Mississippi River on the This Avenue Bridge’s electric street car line. The design is likened to the Twin City Rapid Transit Company’s 1891-1954 street-car system that were powered by hydroelectric dams.  A feat for that time period.

Circus trains started way back in the 1870’s.  Before then the circus used to travel by animal driven entourage.  Circus trains had three kinds of cars; flat cars with colorful wagons, large animal cars, and passenger cars for the talent and crew members.  The circus cars were much longer than normal freight cars since railroads charged by the number of cars as well as miles traveled. So the circus used this tactic to cut down on travel costs.

The model at the museum in St. Paul, is inspired by the “Circus World Museum” in Wisconsin.  They have giant collection of trains, wagons, and other circus collections. The trains at the St. Paul Model Railroad Museum are modeled in O-Scale.  .  O-Scale works out to 1 to 48 and ¼” equals 1 foot.  The model reenact the Circus Train and the parades staged in and around the various towns it traveled to.

So come on out to St. Paul, Minnesota and take a gander through the beautiful St. Paul Model Railroad Museum.

***BONUS*** Make sure you have a full day to visit our next suggestion.  One of the most interesting and fun things to do in all of St. Paul would be to visit the Science Museum of Minnesota in St. Paul.  This activity is great for all ages.