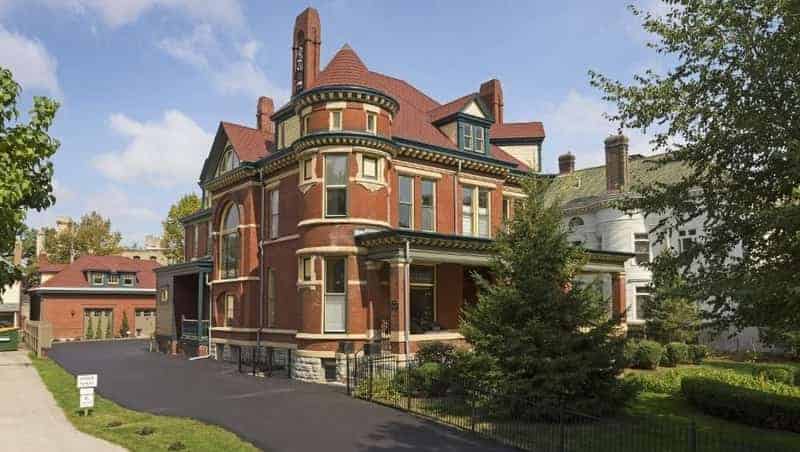 Summit Avenue is a four and a half-mile stretch of the longest street of Victorian houses in the United States.  The street is laced with churches, schools, synagogues, and of course a plethora of Victorian-era homes. Summit Avenue is considered a National Historic District.  It begins just west of the downtown St. Paul, MN area and continues all the way to the Mississippi River.

The F. Scott Fitzgerald House in St. Paul, MN also has an alias which is “Summit Terrace”.  It’s a National Historic Landmark which was designed as a “Rowhouse” or what is deemed “New York Style”.

The Minnesota Governor’s Residence is over 16,000 square feet and was designed by William Channing Whitney, a local architect.  Whitney originally designed the home on Summit Avenue for a renowned St. Paul lumber businessman Horace Hills Irvine. It was designated for state ceremonial functions and to be the home of the governor in 1965.

St. Paul, Minnesota and Summit Avenue have been the home of the James J. Hill House since 1891.  The house is 36,000 square feet worth of living area and the house totals around 45,000 square feet in whole.  It was considered the showcase of St. Paul until the passing of James J. Hill in 1916.

This side by side duplex was built in 1900 for the Supreme Court Justice Pierce Butler which he and his brother cohabitated in the West Summit Avenue Historic District in St. Paul, Minnesota.

This popular home on 432 Summit Avenue is listed in the National Register of Historic Places.  The Burbank-Livingston-Griggs House is part of the Historic Hill District in St. Paul. The home was originally built for the owner of the Minnesota Stage Company, James C. Burbank.  The architect was Otis L. Wheelock. The home is known as one of the very first Tuscan styles buildings in all of St. Paul.

This cathedral in St. Paul, Minnesota is a Co-Cathedral with Basilica of St. Mary in Minneapolis and the Archdiocese of St. Paul and Minneapolis.  The Cathedral of St. Paul overlooks the downtown area and it’s widely considered as one of the most distinctive cathedrals in all of America with its copper-clad dome.  It opened in its current state in 1915.

Dr. Ward Beebe was a bacteriologist who received this home with his wife Bess Beebe as a wedding present around 1912.  The gift was courtesy of Bess’s parents. The Beebe House is a prairie-style home in beautiful St. Paul, MN. One of the great features of the home is the art glass bookcases near the homes’ entrance.

Purcell of Purcell and Elmslie who designed the house once said of Summit Avenue “At the time… it was one of the most talked about residential streets in America, broad and with beautiful trees; the views up and down the street were valued.  So the unusual corner windows looking both ways from the living room were accepted as a fine response toward a choice and expensive location.”

***BONUS*** Visiting the Hmongtown Marketplace is St. Paul is a real treat.  If you enjoy learning about different cultures like we do, you’ll find it’s almost as if you’ve been transported to to a Hmong Village farmers market.  If you’re hungry you’ll be happy to know the Hmong Marketplace also has an indoor Hmong Food Court on site where you can buy a traditional Hmong food for lunch and dinner.