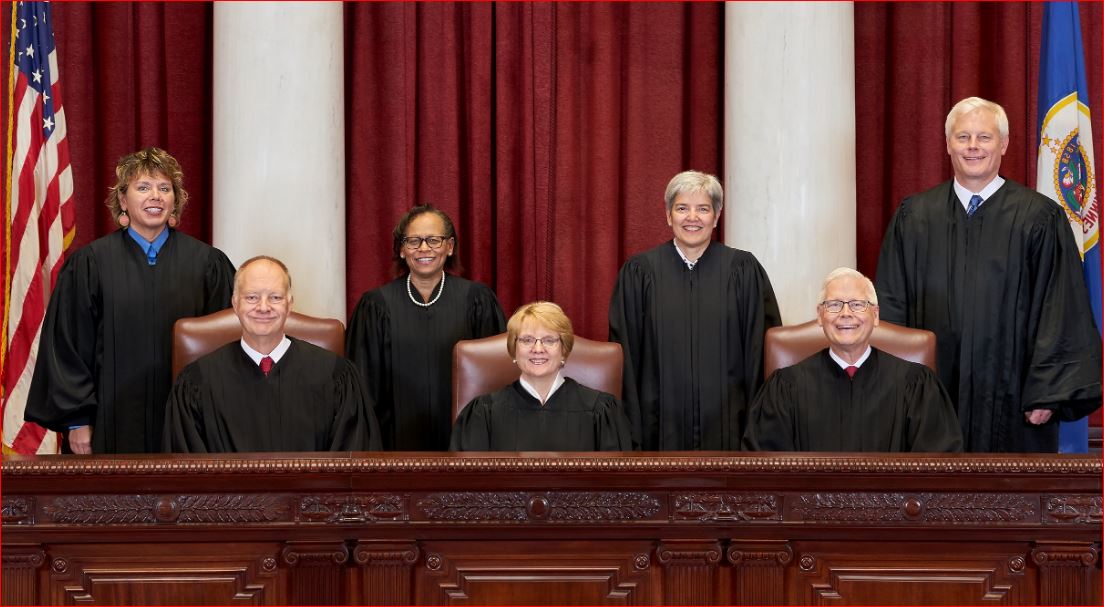 “I’m going to take this all the way to the Supreme Court!” It’s a familiar refrain in legal disputes, but it’s not an idle threat when you are represented by Leverson Budke. We will tenaciously defend your rights, even if it means taking the case all the way to the highest court, just like we did in this Minnesota Supreme Court gun rights case. Leverson Budke will serve as strong advocates if your Second Amendment rights to keep and bear arms are ever challenged. We have the work ethic, experience, and integrity required to take your case all the way to successful conclusion – no matter how high up in the court system we need to take it.

A recent restoration of firearms rights case demonstrates our persistence and dedication. After an extensive legal battle in the trial court and at the Court of Appeals level, one of our gun rights restoration cases will be heard by the Minnesota Supreme Court.

Every Minnesota citizen is entitled to his or her day in court. Leverson Budke has represented hundreds of clients in the Minnesota court system. The process starts at the trial court level. In this case we sought what is called a “writ of certiorari” requiring the Dakota County Sheriff to restore our client’s right to keep and bear arms in the Dakota County District Court. In this situation, a writ of certiorari is an order by the court to an official requiring that official to take a specific action – in this case, we were seeking to restore our client’s firearms rights.

If either party is not satisfied with the trial court’s decision, that party may appeal the decision to the Minnesota Court of Appeals. In this case, we were not satisfied with the trial court’s decision and so our next course of action was to appeal. We filed a written appeal and Steven K. Budke, a partner at Leverson Budke, argued the case before the three-judge appellate panel.

Unfortunately even the strongest advocates don’t always come out on top. Despite our best efforts, upon appeal, two of the three judges rejected our arguments. However the third judge gave a powerful, well-reasoned dissenting opinion that we believe flawlessly captured the essence of our argument.

Although our arguments were rejected on the appellate level, the case wasn’t over. We lost a small battle, however Leverson Budke is known for their persistence and pursued the case with the hope of being heard in the Minnesota Supreme Court. As we stated, everyone is entitled to a District Court hearing and everyone is entitled to challenge an adverse decision to the Minnesota Court of Appeals.

Would You Like to Speak With a Lawyer About Restoring Your Gun Rights?

How Rare is it to Have Your Case Heard by the MN Supreme Court?

For most people that is where it ends–appeal to the Minnesota Supreme Court is at the complete discretion of the Court. In fact, the Supreme Court receives some 700 petitions every year, but only agrees to hear approximately 1 to 2% of those cases. This time, Leverson Budke’s petition on behalf of our client was extremely persuasive and our Minnesota Supreme Court gun rights case will be heard in front of the highest court in the State of Minnesota. We are preparing our oral arguments to vindicate our client’s rights during a hearing date on September 3rd 2020.

The Second Amendment – The Right to Keep and Bear Arms

Most of you are familiar with the Second Amendment:

“A well regulated Militia, being necessary to the security of a free State, the right of the people to keep and bear Arms, shall not be infringed.”

The amendment itself is brief, but it has generated thousands of pages of text regarding its meaning and has been the subject of major United States Supreme Court cases. We can’t go into every nuance here, that would require us to add another textbook to the long list of Second Amendment literature.

It is sufficient to say here that the phrase “shall not be infringed,” while not absolute – none of us would want a criminally mentally ill person to be able to buy a firearm with impunity – it is clear that the Constitution does not look favorably on restrictions on firearm ownership. When we learned that our client’s rights were being infringed, we stepped into action and are still actively fighting on our behalf of our client.

Speak With an Attorney About Gun Rights Restoration

Here are the facts of our client’s story: in 1988, our client Benjamin Tapia was found guilty of the felony of theft of a motor vehicle. There was no indication that there was any actual violence involved in the theft. In other words, this was not a case of what is called a “carjacking” where a driver is ripped out of the driver’s seat and the car is forcibly stolen. Nevertheless, under a Minnesota law which stated that anyone convicted of a “crime of violence” was prohibited from possessing a firearm for ten years, and car theft was defined as a violent crime, Tapia would have been prohibited from possessing a firearm until 1998.

In the case of a truly nonviolent car theft, that seems to “infringe” on the “right to keep and bear arms.” In 2003, the Minnesota legislature amended the statute governing the right to carry a gun by anyone convicted of a violent crime to make the ban on firearm ownership a lifetime ban. Further, the ban was made retroactive–or applicable to backdated cases. Since our client was found guilty in 1998 it appeared that, on its face, the lifetime ban would apply to our client.

In 2014, the Minnesota legislature again amended the statute to remove theft of a motor vehicle from the list of “crimes of violence” that resulted in the prohibition of firearms ownership. However, the legislation expressly stated that the amendment only applied to crimes committed after the date of the amendment: August 1, 2014.

To sum it all up, when our client was admittedly convicted of the nonviolent theft of a car, he was banned from owning a gun for ten years. Years later, he was banned for life for owning a gun. A few years after that, Minnesota’s legislature apparently realized its mistake and took auto theft off the list of “crimes of violence” that created a permanent ban on gun ownership but did not make it retroactive. By this twisted bit of logic, if our client had committed the theft on August 2, 2014 he would have been allowed to purchase a handgun at any time, but because he committed the crime in 1998 he was prohibited from owning a firearm for life. This compelling inconsistency in the law infringed on individual gun rights, and when Mr. Tapia became our client, we decided that we would fight for his Second Amendment rights “all the way to the Supreme Court.”

The Court of Appeals Decision on Gun Rights Case

The Court of Appeals typically hears cases as a three-judge panel. As noted above, two of the three justices did not rule in our client’s favor. Let’s look at their analysis first, and then we will review the dissenting opinion, which we believe embodies the correct reasoning–reasoning that will prevail at the Minnesota Supreme Court.

Minnesota statutes state that a sheriff can grant or deny an application for a permit to carry a handgun if: (1) the applicant has training in the safe use of a pistol; (2) the applicant is at least twenty-one years old and a United States Citizen or permanent resident; (3) the applicant completes an application; and (4) the applicant is not prohibited from possessing a firearm. Clearly, out client met the requirements of sections 1-3, so the only issue was section 4.

The two appellate judges noted that our client acknowledged that he was convicted of a “crime of violence” in 1998. He admitted that he was at first banned from owning a firearm for ten years and later subject to a lifetime ban but argued that the 2014 amendment rendered him eligible to possess a firearm.

Two appellate judges thought otherwise. They held that the amendment’s effective date of August 1, 2014 was unambiguous, despite our argument to the contrary. The two-judge majority found no reason to conclude that the legislature intended the amendment to be applied retroactively. The majority held that retroactivity would not be applied unless “clearly and manifestly so intended by the legislature.”

Schluter’s defense was that the interpretation of the statute was a violation of the Ex Post Facto law, prohibited by the United States Constitution (Article 1, sections 9 and 10). Simply put, the legislature cannot make an action a crime after it has been committed. In other words, the legislature could not designate Schluter’s LSD violation a “crime of violence” after he committed the crime. But the court majority said that Schluter did not apply to our case.

Finally, the court majority concluded that our client was not entitled to the “extraordinary remedy” of a writ of mandamus because our client failed to show that the Dakota County Sheriff failed to perform an official duty, that his actions failed to cause a specific wrong to the plaintiff, and that there was no other adequate remedy for the official’s failure.

One judge agreed with our arguments and would have reversed the trial court’s decision. Because her arguments reflect what Leverson Budke will be presenting to the Minnesota Supreme Court, let’s look at her thoughts.

Judge Smith began by noting that Minnesota’s possession of firearms laws – as in place today — prohibit anyone convicted of “crimes of violence” from owning a firearm. She then noted that currently our client’s crime is not considered a “crime of violence.” But what about the words of the 2014 amendment? Were they ambiguous, allowing for interpretation?

Judge Smith reviewed what we call the “canons of statutory construction,” or, in other words, determining how we should interpret that statute. She started with a rule familiar to lawyers: a statute is ambiguous if there is more than one interpretation. The Judge found that there were more than two interpretations of the statute, first that “crimes” referred to any “crimes of violence” when they were committed, regardless of whether a firearm was involved. Alternatively, the judge concluded, “crimes” could be interpreted to mean a crime committed by possessing a firearm. Under this definition, our client would be eligible to possess a firearm. Therefore, she concluded, the statute is ambiguous.

Here is the key to her analysis: “when a person applies for a permit, using the statutory definition of ‘crimes of violence’ in effect at the time of the permit application is not the retroactive application of the law.” Ultimately, when our client applied for a firearm permit, his prior crime was not a disqualifying crime.

Finally, we agree with the dissent that “the legislature does not intend a result that is absurd, impossible of execution, or unreasonable.”

Leverson Budke is here to zealously protect your Second Amendment rights. As with all of our criminal defense work, we bring years of experience to the table, and as we stated, we will take your gun rights case all the way to the Minnesota Supreme Court if necessary. The restoration of firearms rights case we discussed is representative of our work ethic, experience, and integrity, but it is not the only example of our veracity and persistence. From DWI to expungement as well as restoration of firearms rights, Leverson Budke is there for you from your initial free consultation with us to the final disposition of your case. Just as we have fought for Mr. Tapia and the clients before him, we will fight for your case.

Call Now to Speak With Our Gun Rights Lawyers?