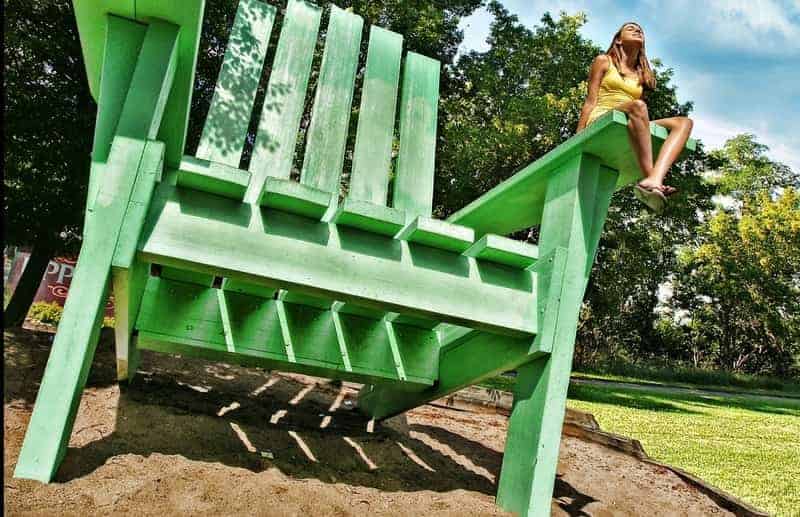 Many cities have a hallmark or landmark or simply just a place or person people talk about.  New York City has the Statue of Liberty or Central Park. Chicago has the Skywalk or the Sears Tower.  Detroit has the Joe Louis Fist which shows the strength and fight of the city. As far as smaller cities go Wilmington, Delaware has the Caesar Rodney Statue.  Caesar Rodney rode horseback to Philadelphia from his hometown Dover to cast the crucial and deciding vote passing the Declaration of Independence. Mt. Washington, New Hampshire has the Mt. Washington Cog Railway which is the second steepest of its kind in the entire world.

The Origins of the Large Green Chair

*The original chair was replaced for the current one which weighs 2,500 lbs one in 2002 due to weather damage.  The precise location of the Large Green Chair is at North High Bridge Park off of West 7th St. at the bluffs of the Mississippi River, in St. Paul, Minnesota.

Where is the Large Green Chair of St. Paul Located?

The Large Green Chair of St. Paul is a great spot for photo ops while in North High Bridge Park.  North High Bridge Park begins at the lower and northern part of Smith Avenue High Bridge. At the park you can find more art other than the Large Green Chair, while also taking in the breathtaking views of the river.  If you’d like to catch some amazing views of the city of St. Paul, you can also make your way up the bridge to Capitol View Park.

Other than the Large Green Chair you can also find more artwork, such as The Stone Watcher.  The Stone Watcher is a large stone sculpture done by Zoran Mojsilov. Mojsilov was commissioned in the summer of 1995 when St. Paul residents couldn’t figure out what to do with all of the leftover stone after building the parks’ walls.  The sculpture is made up of stone and steel rod.

Another site to see at North High Bridge Park is the Czech/Slovak Immigrant Gate.  Artist Craig David made the stone, concrete, steel, and garden plant structure in honor of the Czech and Slovak immigrants who lived and worked in the west of St. Paul, MN since 1860.

So get on over to the Large Green Chair in North High Bridge Park; support The Green Chair Project, and enjoy the art and scenery.

***BONUS*** Whether you’re looking for a beautiful St. Paul wedding venue or just a great place to relax and soak in a little mother nature St. Paul’s Como Park Pavilion is an excellent choice.