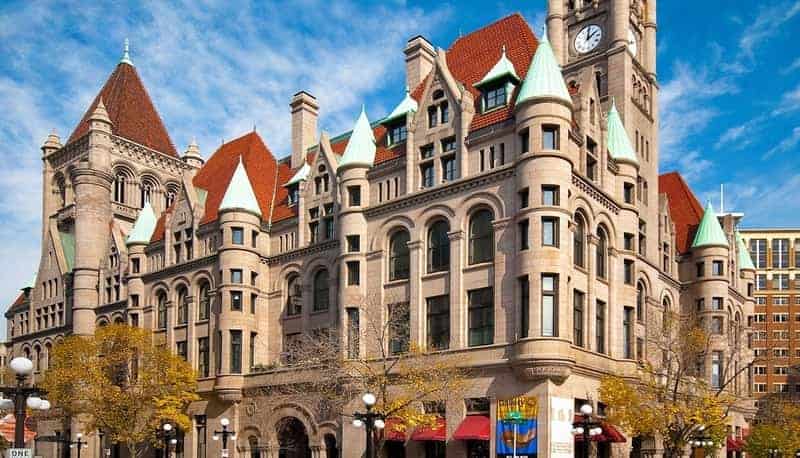 Way back in 1902 the St. Paul Landmark center was built.  However, it originally served as a courthouse, post office, and a special house for the state of Minnesota.

Nowadays the Landmark Center of St. Paul, Minnesota serves the community as a cultural center of sorts.  The center has theater, music, dance, public forums, exhibitions and other special events. This St. Paul gem is managed by the non-profit agency Minnesota Landmarks, which is dedicated to its cause of preserving the Landmark Center of St. Paul.  The center is owned and funded by Ramsey County.

The center offers private and public tours which can be very general or extremely specific depending on what you are looking for.  For instance, there is the Gangster Tour. The Gangster Tour takes you back to prohibition era in St. Paul, Minnesota. It was a tumultuous and crazy time back then.  During the tour, you’ll find costumed guides playing the roles of infamous gangsters in 1930’s St. Paul. Each character eventually ends up in “the big house” or the old courthouse at the Landmark Center of St, Paul.

Then, you have the Interactive History Tours which take place online.  However, if you really want to get the feel of the real history of St. Paul then you can book an in-person tour and see it for yourself.  Currently, you can take the Uncle Sam Worked Here tour and harken all the way back to 1900 when the Landmark Center of St. Paul was the Federal Building in Downtown St. Paul.  The Uncle Sam tour will guide you from 1900 when the building was being built all the way up to the 1960’s when the federal government had it decommissioned.

Guided School Tours are available which make for a two-hour field trip away from the school.  The tour itself lasts about 45 minutes and is recommended for groups of 20 to 25. If there are over 25 student’s there needs to be added supervision.  The Uncle Sam tour is highly educational and has different levels of history and learning for 1st through 12th graders accordingly.

Sundays at the Landmark Center in St. Paul

Sundays at Landmark kicked off back on September 10th with the Mid-Autumn Moon Festival.  The series runs until Mother’s Day, May 13th finishing with the St. Paul’s Civic Symphony Mother’s Day Concert, which is a free event beginning at 1 p.m.  Before the closing show you can catch the Urban Expedition of France and the Bandwidth Community Band Festival. Both of these events are free also.

The landmark Center of St. Paul is located at 75 West 5th Street, next to the St. Paul Hotel and the Ordway Center, facing Rice Park.  Parking is available in Macy’s Lawson and the Science Museum, as well as on the street. The center is accessible for those with impaired mobility.

The Landmark Center of St. Paul, MN is a great way to learn about the deep history of the city while enjoying some fun with friends and family.

***BONUS*** Here are is a list of 4 lesser know museums you must visit while in St. Paul.