DUI vs DWI in Minnesota 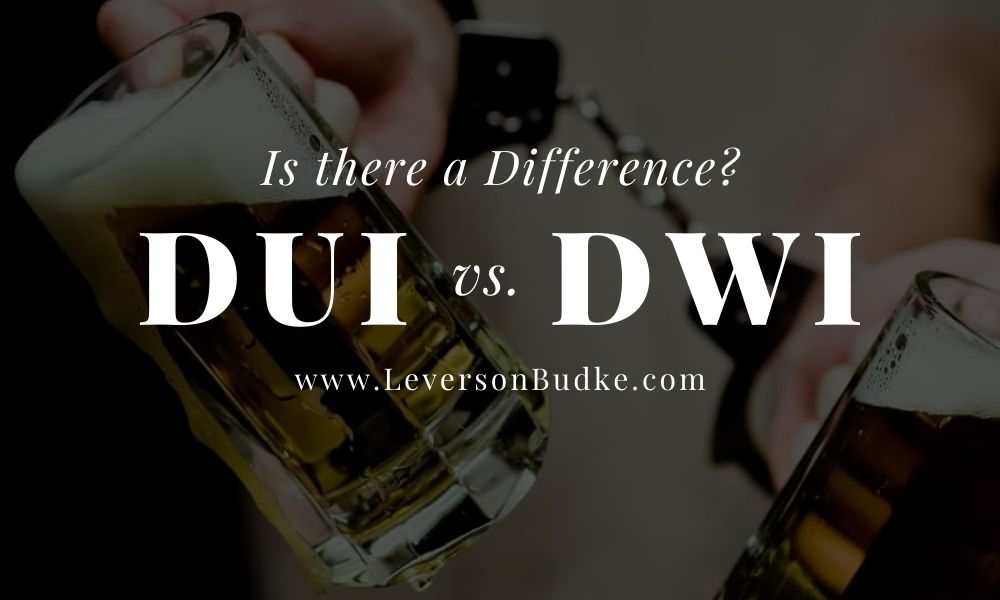 Are DWI and DUI the same thing?

There is a distinction between DUI vs DWI in Minnesota. “DWI” stands for Driving While Intoxicated. A DWI charge means someone was driving a motor vehicle while having a blood alcohol concentration (BAC) of over 0.08.  Conversely, DUI stands for “Driving Under the Influence.” This charge means a person was driving a motor vehicle while impaired by alcohol. A DUI does not require the driver to have a specific level of alcohol in his or her system. All a prosecutor has to prove is that the driver was impaired because of alcohol.  So what’s the difference between DUI vs DWI in Minnesota? If a person is over the legal limit, they may not show any signs of impairment. You can have a BAC of over 0.08 but still not exhibit signs like weaving, driving too fast, driving too slow, hugging or straddling the line, driving at night without headlights, or going the wrong way on a one way street. Police look for these signs of impairment when making a DUI arrest. It is easier for a prosecutor to prove DWI. The prosecutor only needs to show that the driver was over the legal limit, not that they were exhibiting signs of impairment while driving.

Let Us Present Your Best Defense

Is a DUI a felony or misdemeanor in Minnesota?

The terms DUI vs DWI in Minnesota both refer to the same drunk driving offense. The offense of Driving While Intoxicated is defined as:   (i) the act of driving or controlling a motor vehicle while under the influence of alcohol, or a controlled substance, or a hazardous substance. (ii) having a BAC over the legal limit according to the results of chemical breath, blood, or urine test. (iii) having any amount of certain controlled substances in a person’s system according to the results of chemical breath, blood, or urine test. A DUI may be a misdemeanor, gross misdemeanor, or a felony, depending on the circumstances of the incident. Most DWIs are misdemeanors, which result in a fine and driving suspension. However, if aggravating factors are present, such as the severity of intoxication, the presence of a minor child in the vehicle, and the person’s criminal history, the offense increases to a gross misdemeanor or felony. A First Degree DUI or DWI in Minnesota is a felony if the driver has been convicted of DWI in three prior incidents over the past 10 years, a prior felony conviction, a prior First Degree DWI, or have been convicted of criminal vehicular operation.

Will I go to jail for first DWI?

Your first DUI or DWI in MN conviction is a fourth degree misdemeanor. The maximum penalty is 90 days in jail and a $1,000 fine. Most first-time DWI offenders are not given the maximum penalty. However, a first DWI is still serious. If guilty, your license will be revoked for 90 days and the misdemeanor will be on your criminal record. The court has discretion to add additional penalties like community service, probation, a no alcohol restriction with random drug tests, and paying for a chemical dependency evaluation.

How much does a DWI cost in MN?

It is impossible to give a precise estimate of how much a DUI or DWI in Minnesota will cost since each person’s case is different. However, a DUI or DWI in Minnesota generally costs at least $10,000. The costs for a DWI add up quickly. The judge may impose a maximum fine of $1,000 for a first time DUI or DWI in Minnesota. This amount triples if you have prior DWI offenses. You will also be required to pay probation costs of $150 to $250. You can expect to pay at least $150 for the tow and additional impound fees. Since Minnesota law mandates a chemical use assessment, expect to pay a fee of around $150 to $250.  If you challenge your license revocation for a DUI or DWI in Minnesota, you need to file a motion with the court and pay a filing fee of approximately $320. Reinstatement of your driver’s license also comes with a steep charge, usually around $700. Many people who lose their license still need to drive. If your charges result in a lengthy license revocation, you can only get driving privileges by agreeing to use the ignition interlock program. The device costs around $125 a month. Since DUI and DWI in Minnesota are used interchangeably, there is no difference in average cost associated with each type of offense.

How much is the bail for DWI in Minnesota?

When considering the ramifications of DUI vs DWI in Minnesota, many people are concerned about making bail. Minnesota’s DWI bail laws are found in Minn. Stat. 169A.44, and Minn. Stat. 629.471. Normally, first-time offenders are released on their own recognizance (ROR.) However, if the motorist already has a history of DWIs, the maximum bail amount is $12,000, the equivalent of four times the highest fine possible for a DUI or DWI in Minnesota.

Do you lose your license immediately after a DUI in Minnesota?

Yes, a person who is charged with a DUI or DWI in Minnesota will lose their license. Under Minn. Stat. 169A.51, a person who drives a motor vehicle in Minnesota automatically consents to a chemical test of their breath, blood, or urine to determine if they have ingested alcohol or a controlled substance. A driver who refuses the test is usually charged with a DWI Refusal. If the driver follows the law and takes the test, but fails, DWI will most likely be the charge. If you are found guilty this usually results in an immediate loss of  license in cases of DUI vs DWI in Minnesota.

Is your license suspended immediately after a DUI?

If you are charged with a DUI or DWI in Minnesota, one of your biggest worries is whether you will lose your license. If convicted, you will lose your license anywhere from 90 days to several years, depending on the aggravating factors and your criminal history. A first-time DWI offender will have a 15-day license suspension if their BAC test was less than twice the legal limit (under 0.16). After the 15 days are up, the DWI offender will have a limited license for 90 days, or else opt to install the ignition interlock device, which will remain on the vehicle for one year.

Will a DUI affect my employment?

Yes, a DUI or DWI in Minnesota may affect your employment. Some employers will consider your criminal history when evaluating your fitness for a job or promotion. Occupations which are safety-sensitive, such as aviation, trucking, railroad, nuclear, maritime, railroad, pipeline, and transit, may require employees to be tested for drugs and alcohol. If you work in one of these industries, your employer could discipline, suspend, or terminate your employment, depending on the circumstances. In addition, people with professional licenses may find that a DUI or DWI in Minnesota will negatively impact their job. If you work as a doctor, nurse, teacher, real estate agent, or an insurance broker, a DWI or DUI may cause a license loss or suspension. This is why it is so important to call a lawyer when you are charged with a DUI or DWI in Minnesota.

Is your insurance company notified when you get a DUI?

Will a DUI fail a background check?

Prior convictions of DUI or DWI in Minnesota stay on your record for 10 years. The state has enacted a “Ban the Box” law which requires employers to wait until later in the hiring process to ask job applicants about their criminal record. But employers can still use background checks before making their final hiring decision. In addition, state and federal laws require background checks for certain positions. Your DUI or DWI in Minnesota will show up on your background check for 10 years unless it is expunged. For more information on expungement of a DWI, contact Leverson Budke.

You may have heard the acronym “DWAI” and wondered whether it has anything to do with DUI vs DWI in Minnesota. The answer is no. Colorado and New York have a drunk driving offense known as DWAI. DWAI stands for Driving While Ability Impaired. There is no DWAI in Minnesota.

It is easy to get confused between the terms OWI and DWI and DUI vs DWI in Minnesota. OWI stands for Operating While Intoxicated. Minnesota does not use the term OWI. Our neighbors in Wisconsin use the term OWI and prescribe steep penalties for a first offense, such as a six to nine month license suspension.

What happens when you get a DWI in MN?

When you are pulled over under suspicion of DUI or DWI in Minnesota, an officer may ask you to take roadside field sobriety tests. These tests will determine whether you are exhibiting signs of being impaired. The officer may also request that you take a preliminary breath test. As an implied consent state, it is illegal to refuse chemical tests. If you refuse any of the tests, you will be charged with a gross misdemeanor and you will be taken to the police station for further questioning. Additional testing may also happen at the station. The officer will read you your implied consent rights before taking additional chemical tests. In Minnesota, you have the right to contact an attorney as soon as you are asked to take a chemical test. After you take the first test, you  have a right to request a second test to confirm the result.

Although the legislature has not enacted any new DUI or DWI in Minnesota laws for 2020, you should be aware of DWI trends in the state. According to the Minnesota Department of Public Safety, DWI arrests were up 4% in 2019 compared with 2018. New laws, such as the Hands Free law, have given officers more discretion to stop motorists, even if they show no signs of impairment. The state has also increased the number of full-time officers assigned to stop impaired drivers. Getting drunk drivers off the road is a laudable goal, however, the increase in arrests also means an increase in officer mistakes and false arrests. Drivers who are worried about  an arrest for DUI vs DWI in Minnesota should contact a lawyer right away.

If you’ve been caught using your phone while driving, let Leverson Budke present your best defense. Call us today at (651) 829-3572 or click below to schedule a consultation.

If you are arrested on a DUI or DWI in Minnesota under the 2020 MN DWI laws, you should know about new laws impacting your case. Minnesota passed Little Alan’s Law, which makes it illegal for someone convicted of DUI vs DWI in MN to operate snowmobiles, all-terrain vehicles and boats if their driver’s license has been suspended or revoked. Minnesota also enacted the Hands Free law, giving officers the right to stop drivers who use a handheld cellular device while operating a motor vehicle.

Will a DUI or DWI raise insurance rates?

Yes, a DUI or DWI will raise your auto insurance rates. A DWI raises a person’s annual insurance premium by a mean of $582.

Certain convictions will restrict your right to have a firearm. If you have been convicted of a misdemeanor, gross misdemeanor drug violations, or DWI offense punishable by imprisonment for a term over one year, you may be ineligible to possess firearms. See Minn. Stat. § 624.713, subd. 1(10)(i). Keep in mind that a DUI or DWI in Minnesota does not refer to separate legal terms.

Yes. Minnesota may revoke a concealed carry permit if a person is convicted of specific offenses.

The Minnesota Office of Traffic Safety’s study found that 24,862 people were arrested for DWIs in 2017. One out of every seven drivers in Minnesota has at least one drunk driving incident.
Share