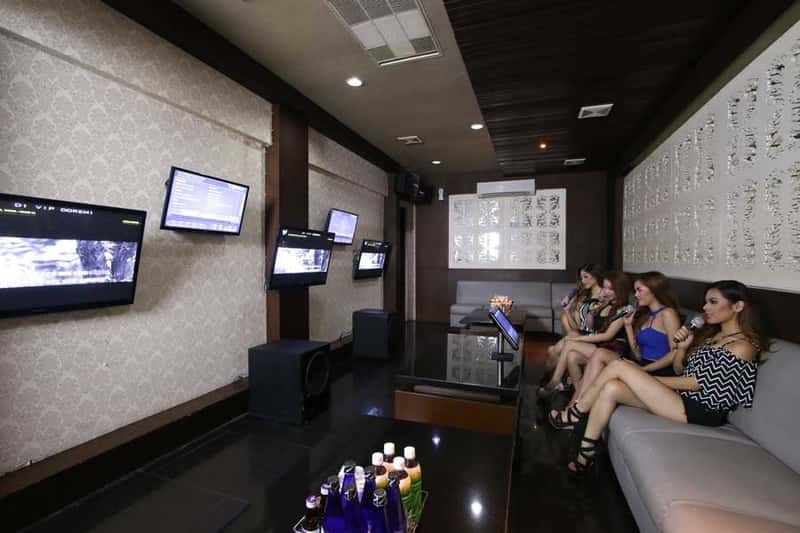 We started the evening at a friend’s house for dinner.  The four of us ate steak, drank wine, and had a nice conversation which was winding down sometime around 8:30.  After a bit of discussion on politics and movies, we then turned our conversation to music and dancing. Soon we decided to have a karaoke night.  The impetus for this came when my friend Sonia started telling Brennan how much better she was at karaoke than he. Brennan or “B” as we call him shunned this sort of talk and wanted to hear nothing of it.  You see B considers himself a “Karaoke King” and Sonia was chomping at the bit to show B “what was up”. That’s about when our chef and host for the evening Meredith chimed in and said: “Hey I know a Karaoke joint nearby.” And that was all it took.  The next thing I know, as I’m sipping more Malbec and trying to decide which song to play on Meredith’s “Mere’s” sound system, I hear Sonia doing some sort of vocal exercise in the back room while B is running up and down his Do-Re-Mi scales in the bathroom.

The scales in the bathroom were sort of fitting since the karaoke joint Mere was steering us to was called DoReMi Karaoke.  We pulled up to the karaoke studio and I certainly was curious about what the night had in store. It was getting close to 10 p.m. by now but they were still open.  They actually stay open until 4 a.m. while serving drinks until 2 a.m. Yes, you fine folks heard that right they serve drinks at this place. Apparently, they even have a restaurant but it closed just before we arrived.

Meredith took the lead and booked us one of the four private karaoke rooms.  They each have different themes and all are equipped with LED light systems, leather couches, and 52-inch flat screen T.V.’s.  I however made my way to the bar and ordered two bottles of Soju. One Chamisul and one Chaum-Charum; each cost $15.95. I also grabbed two large bottles of Sake which cost $10.95.  They did have small bottles for $5.95 but I opted for the former.

We settled into the private karaoke room while Brennan and Sonia flipped through the songbooks which have over 20,000 songs in them.  While that was happening Mere and I shot some Soju and sipped the Sake. During this time a waitress came in and informed us it was last call for happy hour.  Which meant they would stop serving the 2 for 1 Tyku bottle service they offer at 11 p.m. The Tyku Bottle Service was $100 per bottle but before 11 it was two bottles for that price.  We passed on that as Sonia and Brennan were fighting over who was going to sing Sometime Around Midnight by The Airborne Toxic Event, thus, I sensed it was going to be a long night so I ordered us up a $26 bottle of Alamos Malbec and sat back to enjoy the show.