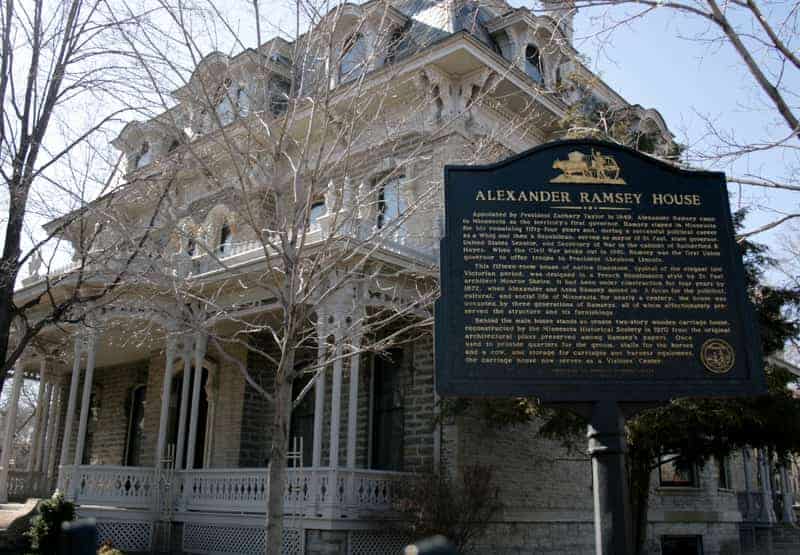 The Alexander Ramsey house was built from 1868 to 1872 and in 1969 it was named to the National Register of Historic Places.  The museum rests in the trendy Irvine Park area of St. Paul, and it’s considered one of America’s most well preserved Victorian style homes.  After the last surviving Ramsey family member passed away in 1964 the home was willed to the MNHS (Minnesota Historical Society) by Alexander himself.  Ramsey is the founder of the MNHS.

Here is a list of happenings at the Ramsey House.

Angels and Madams’ tells the story of the Irvine Park committee that was formed in St. Paul to rid the area of its red-light district in 1881.  The program runs an hour and a half and uses newspaper accounts from back in those days to explain the events. You’ll learn how the citizens and madams’ like Maggie Morse and Nina Clifford fought for their turf.  The show runs on April 27 at 7 p.m. and again at 8:30 p.m. Both shows are 18 and over only.

Victorian Secrets tells the tales of Victorian-era addiction, mental illness, sexuality, and birth control during the early days of St. Paul Minnesota.  You’ll hear excerpts of the Ramsey family letters which gives insight into their private lives and those around them. Back then people rarely discussed their issues in public and kept deep, dark secrets.  This is one you won’t want to miss on Friday, May 11 at 7 and 8:30 p.m. for adults 18 and over.

History Happy Hour takes place on the last Thursday of every month.  On April 26 come on down for the Sleight of Hand Live Performance. This will provide you a glimpse into what magic was like back in the Victorian era.  You can have a cocktail or two while you check out the magic show and socialize with other St. Paul, MN residents. The shows are at 5:30 and 8:30 p.m. and both are 21 and up.  Tickets are $26 and can be purchased for 20% off for MNHS members at the Alexander Ramsey House Museum in St. Paul, Minnesota.

On May 31 History Happy Hour hosts “Victorian Courtship and Weddings”.  Learn the rituals and traditions of courtship from back in the Victorian era in St. Paul, MN.  You’ll find out how many of our modern dating practices were shaped by this era. Tickets are $26 and 20% for MNHS members.  Remember this is only for those 21 and over in St. Paul.

On the last Thursday in June you can sip on a drink while learning what it was like being a domestic servant in St. Paul’s Victorian times.  You’ll see what life was like for the workers at the Alexander Ramsey House in the Irvine Park neighborhood of St. Paul.

***BONUS*** If you’re a fan of local beers brewed on our home turf of St. Paul Minnesota, check out our list of the Top 5 Breweries in St. Paul to visit.